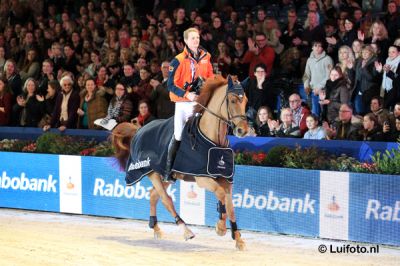 Weâre edging closer to the month of December which is a time for sporting prizes and awards, from the FEI Awards to the awards handed out by the individual equestrian federations.In Holland, a lot of attention is given to its young riders and in particular the Rabo Talent Team is a real factory for future champions. This year they will also be handing out an award to its brightest star.

Last year, Frank Schuttert was named as their talent of the year. The 20 year-old show-jumper has gone on to do very well this year, above all during the outdoor season making appearances at the Nations Cup (2nd in the team category with Holland on Hickstead) and various top-level competitions such as the CSIO Aachen where he won the Prize of Aachen Munchener over 1.55m on E pleaser van T Heike. What is more, he also qualified for the prestigious Rolex Grand Prix (25th with Winchester HS) while in September Frank was present at another important event at the CSIO5* Calgary, qualifying for the GP (30th place with Winchester HS).

The voting for this yearâs Rabo Talent Award closes on the 31st of December. You can do so through the  Rabobank Talent 2014 facebook page. Those interested in voting also have an extra reason to do so as a lucky voter will be given a pass to attend the prize ceremony on the 31st of January during the Jumping Amsterdam event.