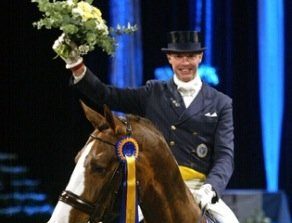 In Stockholm the second qualifier for the World Cupâ ¢ Dressage took place on December 2nd. Both winner Jan Brink and third placed Heike Kemmer announced that the World Cupâ ¢ Qualifier Dressage in Amsterdam was in their schedule.

In Stockholm Swedish star rider Jan Brink managed to win his second car within a week time. At the biggest yearly event of the Globe Arena Jan Brink was the best in the second leg of the Western European League of the FEI World Cupâ ¢ Dressage. âBriar and me were already quite close to winning last week in the openings qualifier in Odense in Denmark and now we won!â, Jan Brink commented. âI am the more happy as Briar felt so steady and nice all the way for two weeks in a row.â
Briar is an exciting horse, having competed in seven World Cupâ ¢ Finals already, two Olympic Games and a lot of other shows. He has uncountable wins on his record, being the overall winner of the Aachen Horseshow in 2005 to be considered as the most impeccable. Jan Brink aims to keeping 16 year old Briar this fit and healthy in the sport, on the way to possibly his third Olympic Games in his 9th year going Grand Prix. Jan Brink: âI cannot wish for more but keeping Briar as energetic and steady as he is now! A good management is my only concern. I just like to show Briar in as many or less shows as will fit him the best, to keep his energy as it is now. To me now he is at top level. I certainly do not aim especially for the World Cupâ ¢ Final but will do the World Cupâ ¢ qualifier in Amsterdam or NeumÃ¼nster just because itâs good competition there and because of the quality of the shows there.â
Another detail to be mentioned is that Brink rode his freestyle music âNumber oneâ in Stockholm for the last time with Briar. The music happened to fit Briarâs son Biggles as well perfectly and Brink will now work on new music to fit Briar.

The chairman of the judges Gustav Svalling emphasized the great management of Brink showing Briar in this good shape. However mr Svalling today considered Tinne Vilhelmson as the winner showing Solos Carex to wonderful heights. Gustav Svalling: âToday for me it was not Jan Brink only who can be praised. Tinne Vilhelmson today showed to me her great capacities as a rider. She did a superb test, riding Solos Carex really smoothly forward. It just was good riding with a happy horse which appealed to the eye.â Tinne Vilhelmson was the runner up and said she rode her test with a super feeling, having a smile on her face all the time. âThe roof almost went of the Globe by the enthusiasm of the audience. It was fantastic! The excitement really rose to the climax with the tight schedule for the canter parts beautifully emphasized by the musicâ, Vilhelmson commented. She rode on Swedish music produced by the former Abba-musicians and it went very well. After her stallion Solos Carex was gelded he changed a lot. âHe somewhat lost his tension and gained concentration and energyâ, Tinne concluded.

Also riding with a smile on her face was German Heike Kemmer. She showed a shining Bonaparte and three of the five judges had her in the runner up position. âIt was sensationalâ, Kemmer said. âAll the time âBonnieâ was really with me. I did an extended canter towards the judges on the centreline and the applause was so loud that I hardly could hear my own music! In the end while doing the piaffe and passage to the judges at the last centre line I even couldnât hear whether I really made the halt on the final music note of my freestyle because of the cheering and clapping! An amazing experience and a wonderful reception. I definitely will continue my season in Amsterdam now. It has been long that I was in Amsterdam and I love to ride there. I am most happy to be back in the dressage centre with Bonaparte in this form. This makes me longing for more.â