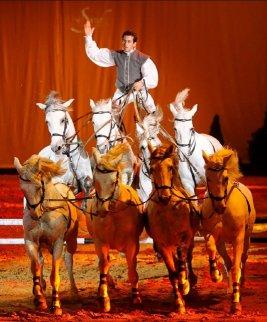 During Jumping Amsterdam there are spectacular shows in between the international dressage and show jumping competitions. For the coming edition of the event Lorenzo the âFlying Frenchmanâ will pay a visit to the Dutch capital.

Momentarily, Lorenzoâs shows are leading in Europe. At the Amsterdam RAI he will entertain the audience with his most spectacular show called Lorenzo Action. With no less than 10 white horses he will galop through the arena and standing on the back of his whites he will overcome any obstacle that is in his wayâ¦