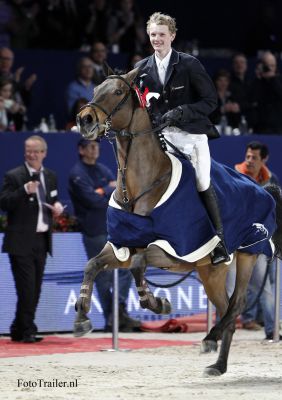 The 2013 Grand Prix of Amsterdam presented by Anemone Horse Trucks was a competition to remember. While some top Dutch riders travelled to Leipzig to show in the World Cup competition, a new generation of jumper riders proved themselves at a top international show in their own country. With abundant panache, the up-and-coming talents demonstrated that the state of show jumping in the Netherlands is more than good.

Of the 43 combinations entered in the Grand Prix, six managed to avoid faults. Four of the six were Dutch nationals, among them the seasoned Albert Zoer with Wollie Bollie and Henk van de Pol with the KWPN stallion Warrant. However, the Grand Prix belonged to the young. Nineteen-year-old Frank Schuttert won the competition aboard Winchester HS. With a penchant for bucking, the Numero Uno offspring is probably not the easiest horse; however, he has incredible drive and is “allergic” to wood. “I was really happy when I learned that the team coach wanted me to compete in Jumping Amsterdam, and we did our very best. In the Grand Prix, things went almost automatically for us, and I felt like it was very easy to stay clear. In the jump-off, we tried to go fast and clear – and that worked. For the coming season, I’m focusing on the Dutch Championships at the end of April, and then I hope to be a part of the Young Riders team that’s going to the European Championships,” said Schuttert, whose brother Hendrik-Jan was proclaimed Rabo Talent of the Year earlier in the week. Those achievements were good reason to celebrate for the Schuttert family.

Another youthful rider also finished the jump-off clear: 26-year-old Wesley Heijdens with Dallas Du Domaine Z, whose time was good for second place. Albert Zoer and Wollie Bollie had an unlucky fault in the jump-off, which landed them in fourth place, despite clocking the fastest time of the field. After jumping a fantastic basic course, the Numero Uno son BMC Warrant TN unfortunately accumulated eight faults in the jump-off and finished in sixth place. Also ending in the top ten was 27-year-old Timothy Hendrix. With four faults in the basic course, he placed eighth on Varanka SFN.