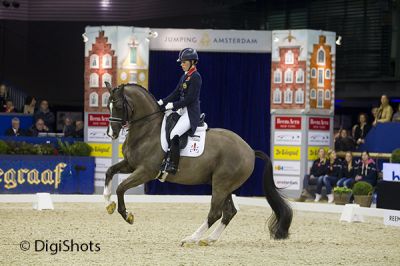 What happens in Vegas wonât be staying in Vegas when the Reem Acra FEI World Cupâ ¢ Dressage 2014/2015 Final comes to town next April.

Show business is at the beating heart of the US city that attracts a phenomenal number of visitors every year. And when you combine that with the sponsorship of a New York fashionista and the most attention-seeking horse-and-rider combinations on the planet, then you have a mouth-watering recipe for a spectacular showdown between the superstars of this ever-expanding sport at the Thomas & Mack Arena in six monthsâ time.

Defending Reem Acra FEI World Cupâ ¢ champions, Great Britainâs Charlotte Dujardin and Valegro, currently hold all the titles on offer in the sport. They set the world on fire when taking double gold at the London 2012 Olympic Games, and their magical quality is second to none. It seemed they were all but unbeatable until coming up against Rath and Totilas at Aachen, Germany this summer where the German pair came out on top. That means there is now a score to be settled, and Dressage fans all over the globe are hoping that the two greats will have a re-match at the Reem Acra season-closer under the bright lights of Las Vegas next year.

Before all that however, competitors from Western Europe, Central Europe, North America and the Asia/Pacific regions will also be fighting for a qualifying spot. The Western European season visits Lyon (FRA), Stuttgart (GER), Stockholm (SWE) and Olympia in London (GBR) before the end of 2014, and the last four qualifiers will be held between January and March 2015 in Amsterdam (NED), Neumunster (GER), Gothenburg (SWE) and âs-Hertogenbosch (NED).

With another German double-champion, Ulla Salzgeber who reigned supreme with Rusty in 2001 and 2002, included in Sundayâs first-leg start-list along with Hollandâs Hans Peter Minderhoud and the talented Swedish duo of Patrick Kittel and Tinne Vilhelmson-Silfven, the 2014/2015 series looks set to be a winner from the very outset.