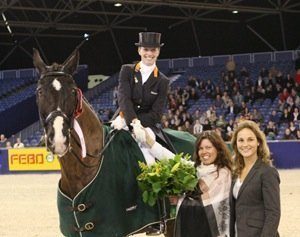 Today in Amsterdam there was no doubt about the winner of the Grand Prix: the reigning Olympic champion Anky van Grunsven and IPS Salinero. No less than 78,042% was the unanimous award of all judges for a test with splendid parts like the elevated and harmonious half passes and the forward and elevated passage. Only in the zig zag IPS Salinero frightened for a short moment, a moment in which Anky professionally took the lead and directed her horse in the right way.

Imke Schellekens-Bartels, Ankyâs teammate for the gold at the EC in Italy,   rode Hunter Douglas Sunrise easily to the runner up position. âShe felt like nothing was the slightest problem at allâ, Imke said happily.
Finnish Kyra Kyrklund and Max became third, showing themselves at ease and in good form. Kyrklund plans to do nothing special but compete before the OG in Hong Kong. âI have been at OG in warm climates before, so there is nothing really new actuallyâ, she said quit at ease.

Dutch StÃ©phanie Peters and Jeff reached for the fourth position. âIn the warming up Jeff was not at its bestâ, partner and trainer Xavier Schulkens explained. âI agree with Sjef Janssen that there is more to come.â