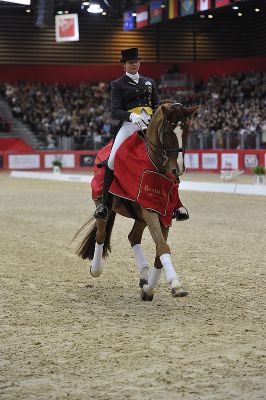 German riders dominated the line-up in Lyon, France.  Saturday Ulla Salzgeber and Herzrufâs Erbe won the second leg of the Reem Acra FEI World Cupâ ¢ Dressage 2011/2012 series ahead of two other former series double-champions.   Salzgeber pipped fellow-countrywoman Isabell Werth and the horse with which the latter recorded the second of her two successes in 2005 – Warum Nicht – while Monica Theodorescu steered Whisper into third place.

It was the Dutch Hans Peter Minderhoud who led the field at the halfway stage with a score of 74.100 from Withney vanât Genthof. But Italyâs Valentina Truppa produced a charming test with a mark of 74.800. She remained in front until the last three riders took their turn and Salzgeber forged ahead with a strong score of 81.625, helped by big extended trot and good passage from the 11 year old horse with which she finished third at last seasonâs Reem Acra FEI World Cupâ ¢ Dressage final on her home turf in Leipzig, Germany. Edward Gal ended on the sixth place with Next One (73,875).

Salzgeber described herself as âhappy, like yesterday!â when she won the preliminary Grand Prix by a significant margin. âToday my horse was tired and so was I, but we did a good test – and we are not good at riding at night. We had a degree of difficulty in our test but he is a very supple horse and he loves piaffe and passage and the transitions into extended trot,â Salzgeber added.   She is planning to compete at Stuttgart and Frankfurt, and was high in praise of the show organisers at Lyon.